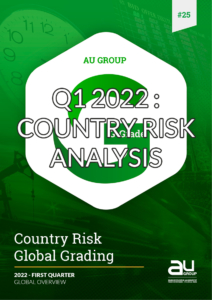 On our last quarter’s G-Grade release , we said that 18 months after the start of the pandemic, hope had returned, with all indicators being in the green again. Today, this improvement in the global economy continues and our country risk measurement tool, the G-Grade, shows 17 major changes this quarter (variation of more than 0.5 points).

Ethiopia was downgraded by two insurers (-0.5 points) this quarter as the country’s situation deteriorates due to the persistence of the armed conflict. While the fighting seemed to stop at the end of December 2021, the TPLF and the Prime Minister’s federal government armies resumed fighting in the Afar region in January 2022.

On the other hand, many improvements in country risk can be noted this quarter:

However, despite this positive trend, which reflects the improvement in the business climate linked to the deployment of vaccination campaigns and the adaptability of our modern societies, country risk remains in many areas and obstacles to a global recovery persist.

At the end of January 2022, the IMF has revised its world growth forecast downwards to 4.4%.