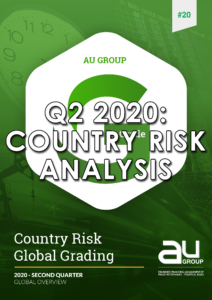 Since AU Group created the G-Grade (Country Risk Measurement Tool) at the end of 2014, we had never previously experienced such a massive wave of country risk rating downgrades. Indeed, with 29 countries downgraded by more than 0.5 points, the severe consequences of the COVID 19 health crisis are laid bare in this quarterly update.

The economic crisis that is sweeping the world will lead to an unprecedented increase in corporate insolvencies. The first significant bankruptcies have already impacted sectors such as air transport, retail, event planning and the automotive industry.

Credit insurers are facing probably the most difficult situation since they started business and the magnitude of the expected losses is such that in most of the “cradle” states of credit insurance (Belgium, Denmark, France, Germany and UK), the insurers have sought the support of local governments. As a result, these European countries have concluded state reinsurance agreements in order to be able to cope with the deluge of claims expected in the second half of 2020 and the beginning of 2021. Other countries might follow with government support but there is no consistent approach across Europe. Nor is there any significant support outside of Europe.

Country risk will play a predominant role in these insolvencies and governments have all taken different approaches to deal with the pandemic. The global press sets out on a daily basis the successes and failures from country to country,  efficiency of the containment measures taken, the subsequent speed of spread of the virus, how quickly border have been closed, and financial measures to support the economy. Obviously, the ability of companies to avoid a default situation depends largely on this local economic environment.

Significant degradations include Spain, Italy, United Kingdom, Brazil, Algeria, Senegal, Spain and Turkey. During the coming days, the weight of sovereign debt will be a major concern for the worldwide economy.

The forecasts provided by the IMF are more limited than in previous quarters due to the total uncertainty of the global economic conditions.