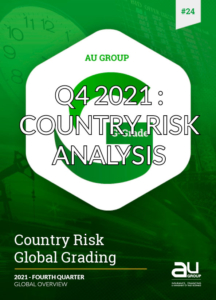 Hope has returned, at last!!! Almost a year and a half after the start of the pandemic, most indicators are green, order books are exploding, and all economies are trying to make up for lost time, creating bottlenecks in supply chains. However, this all-out recovery is not without danger, and some fragilities should not be overlooked: increasing sovereign debt, disruptions in supply chains, the end of state support mechanisms, the first repayments of loans taken out during the crisis, etc…

From one continent to another, the country risk situation is improving at the same pace as vaccination, although if in Europe and the United States, it is slowing down in the face of anti-vaccine reluctance which is preventing the achievement of collective immunity. Our country risk measurement tool, the G-Grade, has recorded several significant improvements reflecting this economic recovery.

The G-Grade is a rating system developed by AU Group that summarises (on a quarterly basis) the country risk assessments of the world’s four leading insurers: Atradius, Coface, Credendo and Euler Hermes. 144 countries are rated from 1 to 10, (the closer to 1, the lower the risk) and the dynamics of this rating are monitored from one quarter to the next. Widely acclaimed by the market, the G-Grade allows for the weighting of trade receivables by country risk and allows for better risk management.

Over this period, several countries have seen their G-Grade improve significantly, notably due to the surge in commodity prices and the immediate impact on their economies:

However, a few countries have seen their rating deteriorate: