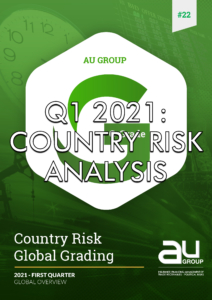 The economists’ forecasts are gradually becoming clearer and, even if the outlook varies significantly from country to country, a return to growth is expected for 2021 with a forecast of world GDP growth that should reach +5.5% (according to the IMF).

In the first quarter of 2021, the G-Grade recorded the following main variations:

– Azerbaijan : (6.50=>7.50): The resurgence of the conflict with Armenia at the end of last year is still causing strong instability in the region (despite the recent ceasefire). The fall in demand and price for hydrocarbons, following the slowdown due to the pandemic, also has a strong impact on the economy of the country which is very rich in natural resources.

– Oman: (6.75=>7.50): The recovery in 2021 will not be as dynamic as in most countries due to the heavy dependence of the economy on hydrocarbons. Indeed the low volumes and price of energy is likely to lead to a large fiscal deficit and a negative current account balance of -14.6% in 2020 according to the IMF.

– Armenia: (7.00=>7.50): As explained above, the conflict with Azerbaijan over control of the Nagorno-Karabakh region has damaged the economy, to which the impact of the pandemic must be added. The poor diversification of the economy will not help a strong recovery in 2021.

– Kenya: (7.50=>7.00): Kenya was one of the first countries to implement containment measures during the pandemic and its economy is one of the few in the world to have grown in 2020 (+1% according to the IMF). The political system remains relatively stable at present.

– Taiwan: (2.75=>2.25): With positive growth in 2020 and a positive current account balance of +9.6%, the country has been one of the most effective in the fight against the pandemic. Exports and investment remain strong and the level of public debt well contained.