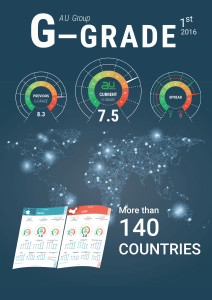 It might be a surprise for some people to see the G-Grade of Greece improving from 8.25 to 7.50! Does this reflect a significant change in the economic situation of the country ?

From a macroeconomic point of view, the Greek economy is still struggling. The short term outlook has deteriorated in Q3 and Q4 2015. GDP is expected to shrink between 1.5% and 1% in 2016, as capital control measures continue to impact investment and household spending. To make payments, Greek companies have to request authorisation either from the Ministry of Finance Committee for big amounts or to the Bank committee (for amount less than K€ 150) by producing relevant invoices as evidences. Credit available to individuals and private companies will continue to shrink and this should lead to a higher payment risk and business failures in 2016.

Nevertheless, on a more positive note, unemployment is expected to improve in 2016-2017 from 27% to 25% and the the overall banking landscape has improved. Some of Greece’s biggest banks managed to raise some private capital and the European Stability Mechanism released € 2.7 Bio to recapitalise the National Bank of Greece.

As credit insurers are covering commercial and political risk, they recognise through such a stronger restructuring of the Greek banking sector, that this has lowered the risk of inconvertibility (or non-transfer risk), which is a major component of political risk. This explains the slight increase of the GGrade on Q1 2016.

Be proactive in assessing your political risks !

Greece at a crossroad
Receive our newsletter