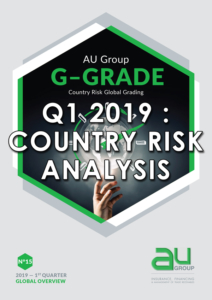 – Trade Wars (especially between US and China)

– Slowdown of the Chinese economy

Apart from these major risks, other recent changes in country risk should not be overlooked and in particular:

Bahrain: Over the past years the country has not been able to reduce the budget deficit from 4 years ago when the oil price fell. Not enough cuts in spending and not enough revenues lead to a complicated situation, especially in terms of currency reserves. The country has the highest breakeven oil price compared to the other GCC countries. These vulnerabilities led to the biggest downgrade of the quarter from 6.25 to 7.

Rwanda: The increase of the G-Grade of 0.75 reflects an upgrade in the assessment of two insurers this quarter. Mainly explained by a better business climate and a sustained pace in the implementation of reforms, the situation in Rwanda appears to be increasingly attractive to private investors. The GDP growth remains very robust (according to IMF: 7.8% expected in 2019, and 8% in 2020) and the level of currency reserves keep on rising.

Montenegro:  G-Grade position improves from 7 to 6.5. The tourism industry remains a key driver of the country’s growth (+3.7% in 2018 – IMF figures) and the political landscape looks stable.