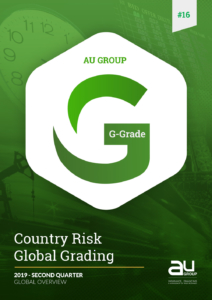 For this second quarter of 2019, AU Group’s country risk measurement tool, the G-Grade, highlights 5 significant changes. As a reminder, only variations over 0.5pts of the G-Grade are considered as significant.

– Jamaica (-0,75 pts): since mid-2013, when the IMF started to support economic reform changes, Jamaica continues to see the fruits of its efforts and the overall picture of its economy is becoming brighter. Austerity measures allowed general government gross debt to reduce from 113.6% of GDP in 2016 to a proposed 88.9% in 2020 (IMF forecast). The unemployment rate decreased by 2 points over the past five years (from 12% to 10%). Despite those positive KPIs, we should keep in mind that GDP growth rate will remain moderate in 2019 (+1.7% according to IMF) and the country remains very much exposed to the US slowdown because exports to the US represent 41% and imports from US : 39% (Euler Hermes Economic Research department). Insecurity level is still very high compared to the other countries in the world.

– Madagascar (-0,5pts): slowly the political landscape is stabilising, and the business climate is improving; the GDP growth is robust with IMF expecting +5.2% in 2019 and 2020.

– Mali (-0,5pts): although Mali is one of the world’s poorest countries with high political instability, the economic situation has improved over the past years resulting in GDP growth of 5.8% in 2016 and 5.4% in 2017 and a level of government gross debt that is deemed acceptable.

– Cameroon (+0,5pts): on one hand, Cameroon is showing some positive results compared to its neighbours: good resilience to oil price fluctuations; low government debt level (38% of GDP in 2019 according to IMF); GDP growth of 4.3% expected in 2019 and 4.7% in 2020. This is mainly due to the diversification strategy focused on decreasing the importance of “oil dependence” in the overall economy. But on the other hand, the instability of the government and the rising political risk have adversely impacted the overall business climate leading (among other facts) to the cancellation of the organisation of the Africa Cup of Nations. The terrorist groups in the north of the country continue to hold back tourism.

– Haiti (+0,5pts): in February, riots and violent demonstrations broke out in Haiti. This “country lock operation” paralysed all economic and commercial activities. Inflation is rising, the currency has fallen in value and the cost of living makes life harder for the majority of the population.