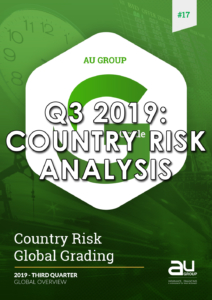 7 countries have seen their risk level varying in Q2, leading to important ratings adjustments by the credit insurers.

– Kuwait and Kyrgyzstan see their situation improving and their G-Grade increases by +0.5pts. For Kuwait, despite the low oil price level, the huge FX reserves allow the country to sustain its economy through its sovereign fund. As far as Kyrgyzstan is concerned, the recent exchange rate liberalisation has led to a monetary policy reducing inflation, and some important measures are taken to reduce poverty and corruption levels.

– Top of the list is Zambia which is downgraded by 3 carriers – the deterioration of the country risk situation makes a consensus (G-Grade = -0.75pts). Since President Lungu’s contested election in 2015 and despite a shift of regime from a mono party state to more multi-party system, political stability did not happen. The heavy level of borrowing by the government to finance infrastructure projects, has pushed the public debt to unstainable levels (according to IMF, the gross debt level will be raised from 20 points of GDP in 2015 raising 80% in 2020). Other problems persist exposure of the copper sector to market volatility, loss of confidence by international investors leading to an increase in capital outflows.

– Oman, Slovakia and South Africa see a deterioration in G-Grade by 0.5 pts. Oman’s exposure to weak oil price level for several years (and being out of the OPEC organisation) has substantially worsened the fiscal balance and external debt. Slovakia benefits from its open economy; however, its exposure to the German market and automotive sector will shortly slow its GDP growth. South Africa is suffering from years of underinvestment, GDP has been very weak in 2018 (0.8% according to IMF) in a fast-growing continent.

Switzerland: state of the credit insurance market
Receive our newsletter