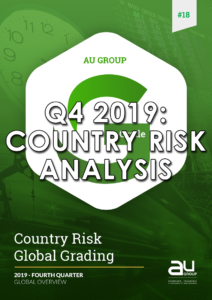 The G-Grade’s purpose is to review changes in country risk and the tool has monitored events and tracked the following changes in Q4 2019:

– (+0.50) Ukraine: The election of the new president and his party’s majority in parliament provides reason to be optimistic about the future. The recently appointed government has shown a willingness to implement reforms. According to IMF, over the past 4 years the government gross debt has dropped by 24pts from 81% in 2016 to 57% in 2019.

– (-0.75) Hong Kong has been in recession for two quarters and the country is suffering from both internal and external pressures (civil protests and the trade war between US & China). Continuing demonstrations have a direct impact on retail, tourism and transport and domestic demand suffers accordingly. Despite its vulnerability to trade dependence with China (55% for exports and 45% for imports according to Euler Hermes), Hong Kong’s external position remains very solid.

– (-0.50) Haiti is paralysed by the demonstrations against corruption and the current government. Fundamentals of the country are still very weak after the misery and the earthquake of 2010.