Austria: back on a strong growth path - AU Group 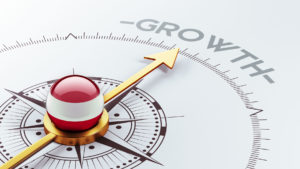 According to the Austrian Institute of Economic Research, the fundamental data shows various improvements: in 2017 the Austrian GDP will grow by +2,8% (2016: +1,5%) – the highest growth rate in the last 6 years. Given the current loose monetary policy of the ECB and the more or less non-restrictive fiscal policy from Austria (budget deficit according to Maastricht criteria -0,6% in 2017 mainly resulting from excellent refinancing conditions), growth should continue in 2018 at the same level. This forecast corresponds with labour market and trade data: Exports will grow in 2017 by +5,7% (2016: +1,9%), but are forecasted to slow down to +4,8% in 2018. The balance of current account, however, will increase from 2,7% of GDP in 2017 to 2,9% in 2018.

Private consumption’s portion of this growth is resulting from a tax reform in 2016.

Although the results of parliament elections on 15th October 2017 currently seem to lead to a conservative and right-wing coalition government, economists deem current growth to be robust enough not to be harmed by a more restrictive fiscal policy.

Consumer insolvencies have massively decreased by -23% – a decrease which has been triggered by a reform of the insolvency law which led to debtors waiting for the new law taking effect.

For the moment, credit insurers estimate that there should be no significant change in the level of insolvencies. According to Euler Hermes, its insolvency index will increase for Austria from 92 in 2017 to 93 in 2018. Atradius assess the situation in Austria as being improving and insolvencies on a low level. For 2018 Atradius predicts no change in insolvency numbers.

KSV, Austria’s leading credit information agency and association for creditors’ protection, expects that insolvencies will increase as soon as interest rates raise. A point of view also shared by ACREDIA, with its brands “PRISMA” and “OeKB Versicherung” – Austria’s largest credit insurer. Companies currently being with a worse credit worthiness and short of liquidity could face problems when they try to finance increasing order volumes and to refinance existing credit lines.

This also demonstrates that monetary policy may have reached its targets on a macroeconomic level but that liquidity has not been provided by banks to the necessary extent.

Impacts on the credit insurance market

Although there have been several large insolvencies in terms of huge liabilities, the low number of insolvencies in recent years has fuelled the already very competitive Austrian credit insurance market in terms of aggressive pricing. The total premium (as published by the Austrian Insurers’ Association) has decreased from MEUR 141 in 2013 to MEUR 136 in 2016. Although Germany is still Austria’s most important export destination, this reduction might slow down because developments in other countries cannot be neglected (e.g. in Italy, third largest export destination).

In Austria, five credit insurers are represented locally: ACREDIA, with a market share in 2016 of 54%, Coface (25%), Credendo Single Risk (12%; due to the special type of business with varying shares), Atradius (9%) and R+V (no data available). Of course, the “Big-Three” – ACREDIA (part of Euler Hermes, but a majority stake still held by Austria’s ECA OeKB), Coface and Atradius – dominate the market. While Atradius and Coface in Austria are dependent subsidiaries, ACREDIA is the last remaining Austrian credit insurer (solvency ratio of 336,5%), beside Credendo Single Risk, with its headquarter in Vienna.

But the figures do not reflect the increasing importance of other insurers from the EU. This importance is expressed mainly in influencing the market positively by different underwriting approaches and product philosophies: Tailor made wordings, cover in emerging markets, single risk solutions for Austria’s e.g. machinery industry and non-cancellable limits in whole-turnover solutions provide added value to Austrian companies.

Insurers’ premium race of the last years will show its impact as soon as interest rates raise (or another unpredicted event occurs) resulting in a higher frequency of claims and therefore increased claims ratios. How will insurers react? Although insurers have learned their lessons from their own behaviour in the financial crisis, the situation today is slightly different: Solvency II and “digitalization” have stepped onto stage. The former is a regulatory burden which seems not really to fit to a credit insurer’s business, the latter being in vogue by insurers.

Solvency II – there is not much insurers can do about this, except to think in a long-term perspective about how to generate business – in other words, premium rates should be resilient – (and, of course, which risks they write). Premium adjustments are only possible for future renewals; Credit limit reduction and cancellation is possible immediately. Therefore, especially for binding supply contracts, non-cancellable credit limits and portfolio-insurer diversification should be considered.

Digitalization can make insurers’ processes more (cost-)effective and also offer credit insured suppliers huge benefits: Already today a vast majority of credit limit decisions is done automatically by algorithms, enabling suppliers to make their decisions fast. Digitalization is nothing new in the credit insurance industry. New is the emphasis on digitalization. Beside some product innovations (In Austria, the first worldwide solely online credit insurance offer for single buyer cover has been introduced by ACREDIA; or on an international level, Coface’s SmartLiner – a whole-turnover product for SME’s sold solely via the internet), the impact on credit risk underwriting is noticeable (e.g. Coface’s TopLiner, additional credit limit capacity against additional premium; or rating driven portfolio steering) and to some extent linked to Solvency II. There is a danger that Insurers could lose grip in their customers’ real world by relying on digitized information. Suppliers should therefore be much more prepared to discuss, supported by the experts from AU Group, in detail with their insurer about particular credit limit decisions and the business environment in which they are active.