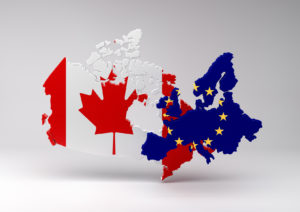 From the American Civil War…

No, we’re not in 2017. We find ourselves at the end of the American Civil War (1861-1865). At that time, the United States, took these retaliatory measures to punish the United Kingdom and its support to the southern states.

At the time, the Confederation offered the colonies a chance to create a new, free-trade market, north of the American border.

…To the British North American Act

Thanks to the British North America Act, which will come into force on July 1, 1867, these British colonies (Québec, Ontario, New Brunswick and Nova Scotia) were recognised as an independent nation.

Entering a new era in trade with the CETA

But, as far as we are concerned, it is probably the Comprehensive Economic and Trade Agreement (CETA) that will allow Canada and the European Union to enter a new era in trade. If the CETA opens a $500 million consumer market to Canadian businesses and $22 trillion in total, European Union members will have access to a market of 36 million people in Canada totaling $2 trillion.

As soon as the agreement comes into force, Canadian companies will have a wonderful opportunity to increase the value of the products they already sell in Europe. 98.4% of the tariffs on Canadian non-agricultural products sold in Europe will be abolished. In return, Canada will abolish 98% of tariffs on these same products from the European Union.

In the service sector, the most-favoured-nation clause will apply. This means that everyone who offers services in Europe and in Canada will receive equal treatment. There will be no quota for services and service providers from the CETA partner countries.

With the CETA, Canadian companies will also have access to European materials, technologies and intermediate inputs and a well-trained workforce. Our exporters will be able to take advantage of these resources to improve the competitiveness of their supply chain.

Once upon a time: Trade Credit Insurance in Dubai – Episode 2: Awaren...
Receive our newsletter