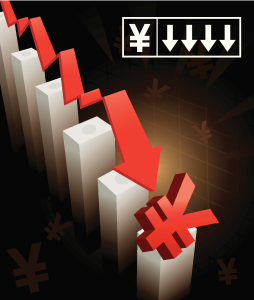 It was another surprise to see Japanese yen going down to another record low (near 120 Yen/ USD) in the past week. The implication is interesting.

First of all, it has forced neighboring countries to follow. Korean won, Taiwanese dollar, and Chinese RMB were responding with weakness. This is because they need to maintain the competitiveness of their products facing Japanese products in the international markets. As a result, Japan would not benefit too much from the depreciation. On the contrary, it may cost a lot in imports which may add up on the price to the end users or consumers. The question is “Why Prime Minister(PM) Abe wants to do it “?

Based on our observation, we notice that PM Abe wants to make short term profits to the large corporations e.g. TOYOTA which may support Abe to win the snap election. Another reason is that the recent drop of oil price ,below USD80 per barrel, may makes Abe feel that his efforts to tackle deflation will fail.

However, Abe should know that though weak Yen may help inflation but in the long run the competitiveness of Japanese economy is unchanged unless Japan makes real reform to tackle the fundamental problems of aging population, loosing creativity, protectionism…etc.

But, we must admit that Abe has good chance to win the election after taking the measure. He may have time to think about other arrows.

As for neighboring countries, similar effects on export and import will be happening. It will not change too much of their basic competition environment. This is because all the neighboring countries have tremendous foreign exchange reserves which can dilute the negative effects of the currency depreciation. It gives China an excuse to keep RIB at lower level again.

The second implication is the strengthen of USED will affect many emerging countries a.go. Philippine, India, Indonesia…etc. which are not export -oriented and don’t have huge FX reserves. As the result of stronger USD, their cost of importation will be higher. It will inflate the consumer price and discourage domestic consumption and make the economy growth more difficult. Also, those countries need foreign investment or USD funding to improve their infrastructure projects will cost more or have difficulty in funding for the future development. But it seems nobody complaining about this.

Besides, country like Indonesia ,which used the same measure i.e. currency depreciation to recover from its financial crisis in 1997, simply couldn’t complain other country using similar tool.

Last but not the least is how do those EU member countries feel about the issue of currency depreciation in Asia since they don’t need to respond to the issue any more. From the positive point of view, it is good for many countries to save efforts in wasting time to adjusting the effects of import and export because of the change value of currency. But from the negative point of view, few countries may argue that we have lost the mechanism of using currency depreciation to earn more hard currency without increasing the inflation.

As a result of the currency depreciation competition, many large companies of the countries are keen to maximize the advantages by manipulating FX risk. It may make serious recession outlook of the global economy look better than it should be. And the irony is over 90% of those companies together with all the large development banks e.g. ADB, EBRD,and World Bank continue to resist using credit insurance to facilitate trade . Most of them still stick to traditional term of trade i.e. cash or LC practice.

Losses can be large, sudden and unexpected

The economic situation in the Czech Republic
Receive our newsletter