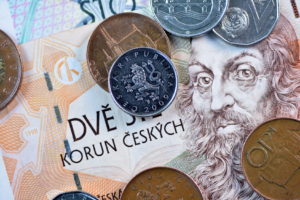 The Czech Republic (CR)  has reported economic growth last year at 2,3% of GDP. The IMF 5 year  forecast for the CR shows stable year on year  growth at around 2%. Is it achievable? Nobody is certain. But let’s look at the main influencing factors.

Nowadays Czech Republic shows one of the lowest UR in the EU. The companies in CR report a lack of available  workforce on the labour market. It becomes more and more difficult to find qualified workers, drivers, seasonal workforce and many others. The logical result is not only the pressure on wages and labour fluctuation but ultimately  on inflation and common price growth. These factors can limit corporate  growth and, at the end of the day, the macroeconomic growth.

As the Czech Republic is still not  in the Eurozone,  the economic growth is influenced by the EX of  CZK/EUR. However the CR is strongly linked to the German industry and market which  is one of most open economies in the EU. The political and economic situation in the neighbouring countries has a direct impact  on the economic conditions in  the CR.   All companies monitor the trend in RX very carefully and have to incur additional costs to fix the rate. The EX  intervention of CNB stopped at the beginning of last summer and we see continual growth of the currency. The next influencing factor on the EX  is the interest rate. At the beginning of August the CNB raised its main interest rate by 20 basis points at 0,25 per cent of the two-week repo rate. That was the first move since the financial crisis. The consequence of this step was a jump and continual rise of CZK which is now reaching the level of 25,00 against the euro – its highest level since June 2013.  As a result it is  clear that the export companies have lost  one of the advantages for their growth. We see the significant drop of  insolvencies in the Czech market in the last couple of years. Even more the statistics say that we have had in 2017 the smallest number of  bankruptcies  (in public companies) in the CR  for the whole history of statistics measurement. But on the other side we can see that the share of bankruptcy on the total insolvency petitions is continuously rising. As a logical result of this trend,  the losses by policyholders  is more occasional but for larger amounts . So the insurers  expect non-frequent losses but with a bigger  impact to their profits. In the past 2 years the credit insurers have recorded some significant cases of bankruptcy; for example, the engineering company CKD Praha DIZ – an important supplier of construction materials  (e.g. largest road tunnel in Prag, nuclear power plants etc.); an e-shop with low-end electronical equipment Levneelektro.cz or some of machinery plants from Vitkovice Group Holding.

The number of insolvencies was also influenced, especially in the third quarter of last year, by an  amendment of the Insolvency Act. The main focus of the amendment was to eliminate the widespread practice of the filing of unjustified insolvency petitions by creditors. The amendment intends to allow courts to reject such petitions. As in the past, the existence of receivables was not the mandatory assumption many f insolvency proposals were pushing . This was eliminated last year. Credit insurance in the Czech Republic is provided by 4 credit insurers. Three of them are the large world-wide based insurers (Euler-Hermes, Atradius and Coface) with a market share around 70%. The fourth one is Credendo Short Term EU-Risks which is the company originally established by EGAP (state insurance company) later sold to the Belgian Credendo Group which operates within the European countries. The significant losses suffered  by insurers operating in the CR  market was driven from insolvencies as a result of the intervention of state KOBRA – special police department focused on tax fraud and carousel trades. That was commented and confirmed by representatives of Coface and Credendo.

Regarding the official economic result of 2017 for the all credit insurer’s market we have to wait until at least end of 1Q 2018. But Credendo has published  its preliminary result as of 2017. Based on the short news they expect to reach 11,6 bill.€ of insured transactions which is approx. 25% growth comparing to 2016.

UK: An overview of the economic position

Voidable Preferences and Insolvency – The Hidden Risk
Receive our newsletter