Dubai: back in business - AU Group 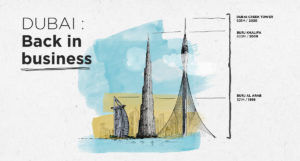 The economic conditions in Dubai and in the region were challenging in 2016 and 2017, but we have started to see an improvement since the last quarter of 2017. Indeed, business sentiment is now much better across many sectors in the region and growth should gain steam as the year progresses. What are the reasons for the improvement?

First, all the engines of the economy from West to East are performing well and most importantly at the same time, which was not the case for a long time. The IMF confirmed global growth of 3.7% in 2017 and this positive momentum should continue in 2018 and 2019 with growth forecast at 3.9%.

Stronger growth globally means a higher volume of trade, which automatically benefits emerging economies where the trading of commodities plays a strategic role in their development. Consequently, Dubai, which is a trading hub, is taking advantage of this positive trend with their strategic location on the world map and their world-class infrastructure such as the port of Jebel Ali.

For instance, it is interesting to look at the number of containers handled by Jebel Ali port and to understand how the slowdown in growth globally impacts Dubai. We see that after a continuous growth until 2015, we note a decrease in 2016 and most probably in 2017 as well, but 2018 should show a reversal of this trend with the recovery. Secondly, I would say that this is the normal business cycle where you see a technical rebound after two years of slowdown, especially in a flexible economy such as Dubai which can adapt very quickly to any external changes. Furthermore, I believe that economic cycles are becoming shorter and shorter partly due to the speed at which information flows all over the world; when the rain is over, the sun comes back even quicker.

Third, the recovery in the oil price obviously plays a key role in the improvement in the economy as it increases the revenues of the government who can inject more liquidity into the economy by financing more infrastructure projects and other landmark developments. Indeed, the price of oil has more than doubled after falling below $30 at the beginning of 2016. More public spending is boosting the private sector which creates a “snowball effect” into the economy. Furthermore, local banks see their level of liquidity increasing as more “petrodollars” are kept by government entities in their accounts which should theoretically encourage banks to lend more to businesses.

Finally, lending to companies and more specifically to SMEs is the last stage for the economy to operate at full capacity. However so far, banks are still hesitant to provide more lending to private businesses, but we can expect a change over the course of the year.

The overall economic environment is quite positive, but some downside risks remain.

What are the downside risks to growth?

The major risk to growth in the region would be a fall in oil prices as we experienced in 2015. Most of the countries in the GCC (Gulf Cooperation Council) are speeding up diversification of their economy, but oil remains a very important source of revenue and even Dubai, which is a well-diversified economy, will be indirectly impacted by falling oil prices.

However, I do not think this is likely to happen, and we might even see a shortage of oil sooner than we think because of a lack of capital investment over the last 3 years. As you can see on the graph below, there was a decrease in investment of 25% and 26% in 2015 and 2016 which will have an impact on supply in the years ahead. Challenge for getting paid by debtors

It is challenging for businesses in the region to collect money from debtors and it is a recurrent problem that weighs on growth. The trade credit insurer, Euler Hermes, released a study about the collection complexity depending on the country by looking at several factors such as the payment behaviour and the legal framework. This report highlights the fact that the UAE is lagging behind when compared to other trading hubs such as Singapore or Hong Kong. Although the payment behaviour of large domestic companies is generally good, the risk of non-payment is relatively high when dealing with small and medium size businesses.

The world has been getting used to cheap money since the crisis of 2008 with the flow of dollars that has been injected into the economy by the Federal Reserve and other central banks, but it is coming to an end. Indeed, the Federal Reserve reversed this quantitative easing programme last year and has started to lift short-term rates. It is going to weigh on the profitability of businesses because most of the currencies in the region are pegged to the dollar, therefore the cost of financing a business through the banks will increase.

Donald Trump has started to impose tariffs on some imported products, which is likely to trigger retaliation. It raises the prospect of a trade war that threatens to engulf the global economy and so the volume of trade, which is an important factor for an economy such as Dubai as we mentioned earlier. Now we need to see what will really happen because this might just be Donald Trump’s negotiating strategy with his trade partners such as China; he provokes huge reactions by threatening to impose high customs duties to force them to come to the negotiation table. Ultimately, we will have to wait and see.

To conclude, economies in the middle east such as the UAE are very flexible and they can adapt very quickly to positive or negative external changes. Globally the trend is positive, and Dubai is taking advantage of it, let’s hope that it will continue.  However, it will not be without surprises!