The economic situation in the Czech Republic - AU Group 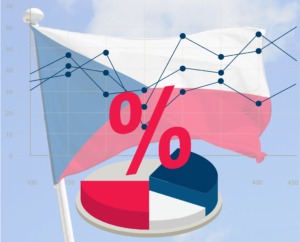 This weak economic performance was partly the result of austerity measures, as tax increases and public sector cuts lessened the purchasing power and confidence of both households and businesses, with a consequent impact on domestic demand. At the same time, low demand last year from EU trading partners hit exports. At more than 75 %, the Czech Republic’s export-to-GDP ratio is one of the highest in the EU, making it especially vulnerable to foreign trade losses. The contribution of net exports to GDP turned negative in 2013 as Eurozone growth shrank 0.4 %. However, the economy has picked up since the end of 2013, growing 2.5 % year-on-year in Q1 of 2014. The Czech economy is forecast to grow about 2.5 % in 2014 and 2.8 % in 2015.

This recovery is expected to be broad-based, benefiting from rising private consumption, investment and government spending. Net exports are expected to pick up, due to the more benign economic conditions in the Eurozone and Germany’s robust economic performance.

The Czech Republic´s unemployment rate reached 6.5 % in April 2014, down from 7.1 % in April 2013. Its jobless rate is considerably lower than that of the Eurozone and, with the economy gaining strength, unemployment is expected to decrease further to 6.0 % in 2015.

Budget deficit dropped below 3% of GDP in 2013. Despite the economic contraction, government finances improved in 2013 as the budget deficit decreased from 4.2 % of GDP in 2012 to just 1.5 %, putting it below the 3 % of GDP Maastricht threshold. In 2014 the budget deficit is expected to remain below this threshold, at around 1.8 % of GDP. As a result of the latest deficit reduction, the European Commission has decided to remove the Czech Republic from its Excessive Deficit procedure under which EU member states are obliged to avoid excessive deficits in their national budgets. Government debt decreased slightly in 2013, to 46 % of GDP, but remains moderately high, after the public debt-to-GDP ratio reached 46.2 % of GDP in 2012 – up from 28 % of GDP in 2007. Government debt is expected to remain stable or even to improve slightly in 2014