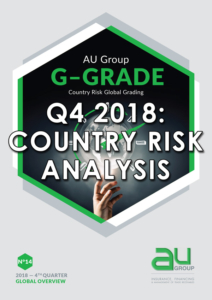 Who did not notice that the main worldwide stock exchanges have been shaken recently by political events:

Against this background, monitoring exposure to country risk remains an important factor for companies and the G-Grade is obviously a great tool to do so. In this quarter, our risk mitigation tool reveals the following variations:

Significant improvements this quarter are in the Balkans region: