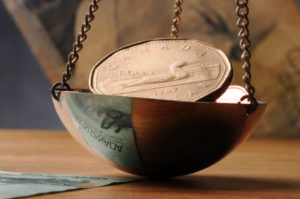 The Canadian one-dollar coin is commonly called the loonie as it bears images of a loon, a well know bird in Canada. Loons spend the winter season south of the Canadian border. Every spring, they migrate North.

On the 12th of July, the Bank of Canada increased its overnight rate target to ¾ %. This sent the loonie, the currency, not the bird, flying North. It rose 1 per cent against the US dollar to C$1,2788, its strongest level since August 2016.

Interestingly, this “migration” was widely expected by the markets. So why the increase?

One question remains: is this good or bad?

The Canadian government is betting on exports to fuel future growth. It has sealed the Canada Europe Trade Agreement (CETA), and is actively seeking similar agreements with South American countries as well as renegotiating the NAFTA. The bet may turn South as a higher Canadian dollar negatively impacts exports.

It is then a fine balancing act between the internal consumption overheating and the need to grow through exports. It is interesting to notice that Steven Poloz, the current Bank of Canada governor, was EDC’s chief economist prior to joining the BoC. EDC’s mandate is to grow Canadian exports.

One thing is for sure – the loon (the bird) will go back South in the fall. All that remains to be seen is whether the loonie, the currency, follows suit or not.

Once upon a time: Trade Credit Insurance in Dubai – Episode 2: Awaren...