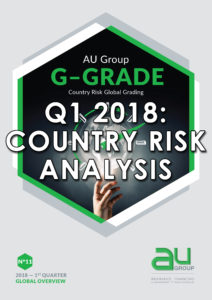 Over the past 6 months, the improvement in the global economy is also reflected in the GGrade, especially when more countries are being upgraded than downgraded. In Q1-2018; this trend continues, with significant GGrade increases for Slovenia (+1) Azerbaijan, South Korea, Taiwan, Ukraine (+0,75) and Egypt, Kazakhstan and Rwanda (+0,5). Only two countries see their rating significantly decreased: Philippines (-0,75) and Bahrein (-0,5).

2 Insurers increased recently their assessment of Slovenia: The economic stability of the country and its constant and regular growth over the last 10 years is a factor of trust. The GDP growth is expected to remain around 3% in the coming years and the current account balance posted a large surplus around 5% in 2017 and 2018.

Despite of its high level of dependence of the oil price, Azerbaijan has been able to maintain and strengthen its level of foreign exchange reserve and to keep its external debt at a low level.

South Korea has posted a solid GDP growth in 2017 that is expected to be steady around 3% in the coming years. Significantly driven by its exports and especially in the ICT sector, South Korea’s good economic situation persists as good relations with China (its first economic partner) remains. The situation of North Korea behaviour continues to threaten South Korea’s political situation.

Upgraded by two insurers, Ukraine’s improvement seems to be a consensus. The good GDP growth (3%), liquidity reserve’s hike and the results of IMF pressure to set up countermeasures, have stabilised the situation in the country.

Countries where the risk situation worsens are mainly:

Philippines (-0,75) where the unstable situation of the Muslim regions in the south and the high level of bureaucracy and corruption, increase political risk. The government has announced its willingness to invest in the infrastructure that needs to be improved.

Bahrain (-0,5): its vulnerability to weakening oil price impacted its fiscal balance and the level of government gross debt has increased significantly; this should continue, as IMF forecasts this level to reach 108%of GDP in 2019, versus 90% today.

End of the recession but an uncertain future

UK: An overview of the economic position
Receive our newsletter