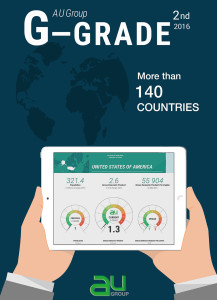 Risk Managers cannot avoid taking into consideration the current shaky environment especially at a political risk level! This quarter has again shown some strong developments and approximately fifteen countries have seen their AU G-GRADE evolve significantly over the period.

In AU G-GRADE 2Q 2016 two main streams can be distinguished :

Brazil and surrounding countries: Brazil has been strongly downgraded this quarter (6.5 vs 5.25 on 2016-Q1).

The economic recession (high unemployment, inflation reaching 10%, …), the political context (the precarious position of the president Dilma Roussef) and a lack of economic perspective, has led to a significant withdrawal in underwriter’s cover throughout the zone.

Due to a domino effect, the situation of countries highly dependent on the Brazilian economy, is deteriorating as well (Ecuador – 0.75, Colombia -0. 5). We might expect the situation to worsen in Ecuador due to the recent earthquake and the risk of civil disorder. Colombia is not only impacted by Latin America economic situation, but by the drop in commodity and oil prices, as hydrocarbon generates more than 30% of the state revenue.

Some economies highly dependent on the price of oil: Oman, Qatar, Gabon et Ghana saw their G-Grade reduce by 0.75.

Some others like Armenia, Azerbaijan and Kazakhstan (with their grading’s sliding by 0.5 points) have not only been hit by low oil price but by the recession in the Russia as well, where the situation is expected to be less severe in 2016. The household’s consumption will remain constrained by an inflation still expected up to 10%.

On the other hand, 2 countries have seen their situation improving this quarter:

Argentina: the strategy to re-open to international capital markets, the election of new president Mauricio Macri and the recent measures to smooth capital control flows, have all increased investor confidence. Nevertheless, the economy will still have to struggle with heavy public and current account deficits.

Philippines: a GDP growth of 6% is expected in 2016, due to the fundamentals of the economy strengthening in the last few years and the expectation that the country should not be affected too much by the Chinese economic slowdown.

Download the AU G-Grade 2Q 2016
Greece at a crossroad

Too big to fail ? Don’t live in fear of your main customer going out to...
Receive our newsletter