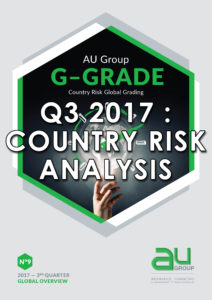 Since inception of the GGrade (2 years ago), we have rarely seen a swing of 1.5 points. Qatar has been drastically reduced from 3.25 to 4.75 by three of the four underwriters. Even if the rating remains at an acceptable level, there is total consensus by all the economic research departments. The embargo by Saudi Arabia, Bahrein, Egypt and UAE includes a blockade of the borders (land, sea, air) and the ejection of Qatari officials from those countries. Therefore, Doha has now turned to Iran and Turkey for its main supplies (especially food). The drastic measures requested by its neighbours is shaking Qatar’s economy and its stability; the country is accused of being too close to Iran and of financing terrorist activities.

Azerbaijan becomes more vulnerable (G-Grade downgraded from 6.75 to 7.75); its high dependence on the hydrocarbon sector (more than 1/3 of its GDP and around 80% of its export) leads to a dangerous situation. Any external shocks such as oil price variation or unstable FX rate policy from its neighbouring countries might have a significant adverse impact. Over the past years the country was accustomed to GDP growth up to 10%. In 2014 and in 2015 the GDP ratio reached 2.8 and 1.1%, and -3.8 in 2016 (IMF Figures).

In the Czech Republic, macroeconomic fundamentals look stronger; after a deceleration of the GDP (4.5% in 2015 and 2.4% in 2016), first half 2017’s figures are promising. Internal demand, boosted by dynamism of the job market and fixed investment as well as external demand (benefiting of the robust European automotive market) are the main driver for growth.

Once upon a time: Trade Credit Insurance in Dubai – Episode 3: Growth
Receive our newsletter