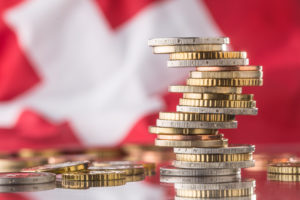 The Swiss economy (country rating AA1) is one of the most stable in the world and also one of the most competitive. The economy grew by 1% in 2017 – there is low unemployment and good private consumption. The country is highly dependent on the export industry and the main export markets are:

The main strengths are:

The main weaknesses are:

With regard to insolvencies, the sharp CHF appreciation and the consequent growth slowdown caused the number of corporate insolvencies to rise by +7 % in 2015. The trend moderated to +3 % in 2016, in line with the improving economy and to +1 % in 2017; stabilisation in 2018 is expected.

Impacts of the economic situation on the trade credit insurance market

The main growth targets by the insurers are in Bonding and in International business. The risk rating of swiss companies is steadily improving as a reflection of the strength of the Swiss economy. Swiss companies are not obliged to file their financial statements which makes the information collection difficult and time consuming. The number of financial data collected increased by 31 % since 2010.

The risk portfolio of Swiss policyholders is mainly driven by export business (> 80 % concentration in two sectors: commodities and IT) with high average credit limits and a reasonable portfolio quality. Nevertheless, the insurers are more vulnerable to large claims and rely heavily on few very large policyholders for premium growth.

The main challenges for the Insurers are:

Africa in the medium term will gain a higher importance (a local risk underwriting presence is necessary); Turkey, Eastern Europe and Russia will continue to be very important with disproportionately more claims in Central and Eastern Europe than in Western and Central Europe. . Risks in non-Core-Countries with weak economies and weak banking systems remain challenging

Net premium for credit insurance in 2016:

Some other insurers have a low market share: Zürich, Chubb, AIG, Aspen,…

Insurers need to follow the economic and technical trends in the industry (Switzerland is an example in terms of innovation and dynamic environment) and they have to propose new solutions to continue to be competitive. We see the following trends for the future:

In general, Switzerland still has a big potential in the credit insurance industry. A lot of companies are not fully aware about credit insurance and the requests for cover can only grow , due to the impact of financing requirements and the volatility of the prices in commodities. The key to success will be the capacity offered by the credit insurers in order to support the sales development of the companies. It is also very important to have some insurers (e.g. Equinox, Markel, AIG,…) as partners offering capacity in difficult regions such as Africa, Middle East, where the “big insurers” like Euler Hermes, Atradius and Coface have reduced their appetite, due to bad experiences (claims) in the recent past.