Once upon a time: Trade Credit Insurance in Dubai - Episode 1 - AU Group 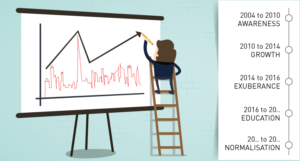 Trade credit insurance has been widely used in Europe for quite a long time by businesses to manage the risk of non-payment from their clients and to raise working capital.  Although this concept is still relatively new for Dubai and other countries in the Middle East, the speed of expansion cannot be compared with what we have seen in Europe since the end of the Second World War.

Every new product, which is launched in a market, experiences different phases of development and this can be divided into five phases for trade credit insurance: awareness, growth, exuberance, education, and normalisation. Trade credit insurance has gone through these phases over the last 70 years in developed countries and I believe that it will not take more than fifteen years for Dubai to experience the same journey; globalisation, digitalisation, blockchain technology, better education and experience make things happen more rapidly nowadays.  Furthermore, the strong willingness of regional rulers to make Dubai one of the main hubs of globalisation is an important factor in the speed with which things progress in this part of the world.

I will dedicate this series of six articles to explaining these different phases, and more specifically the extent to which these developments can be observed in the region.

If we try to delineate each stage over a period of time, we can arrive at the following timeline:

Varying speeds of development depending on the country

With globalization speeding up, credit insurance providers have significantly expanded their operations over the last fifteen years to include emerging markets in three main parts of the world: Asia, the Middle East and South America. I believe that we can observe many similarities among these emerging markets where equivalent phases have taken place, but not necessarily at the same pace due to different economic dynamics (South America is lagging somewhat behind for instance).

We will explain in the next article – the second out of this series of six – how Trade Credit Insurance started in Dubai: the awareness phase.