Once upon a time: Trade Credit Insurance in Dubai - Episode 4: Exuberance - AU Group 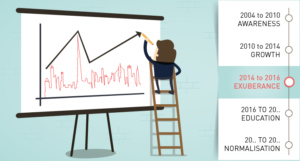 After a period of significant growth in a non-mature market, exuberance often shows up, which is the normal course of business in a capitalist world.  Some large corporates and SMEs were raising unrealistic amounts of working capital from banks thanks to trade credit insurance and at the same time the economy was running out of steam.

Compliance with the terms and conditions of the contract is key in trade credit insurance, and as it was not explained very well, and therefore not properly understood by policy holders and bankers, many misunderstandings and disappointments arose.

At this stage of development of this product in the region, it would have been better to use trade credit insurance mainly as a risk mitigation tool by bankers rather than as a financing tool (i.e, securing accounts receivable of banker’s clients with a credit insurance contract lowering the probability of default by their clients).  At a later stage complexity could have been introduced into the market, but gradually.

However, as explained in the previous article, this is not what happened as trade credit insurance was mainly used by businesses to raise cash for their daily operations by factoring one of their main assets which is accounts receivable, or even using their payables to get more financing from banks.

This way of using trade credit insurance requires high standards of compliance and the market was not yet ready for that.

The economy was running out of steam

Starting from the end of the second quarter of 2015, companies within the GCC were experiencing a more challenging market environment due to the drop in the oil price (Brent fell to below $30 in January 2016), dollar appreciation and a global trade slow down. Moreover, local governments within the region had to adjust their budgets to this new reality in order to manage their deficits, which slowed down public investment.

As a consequence, we saw many payment defaults arising from local companies and even bankruptcies or, as we say in Dubai, “runaway cases” (owners of the companies flee the country as they cannot pay their debts), which forced bankers and credit insurers to adjust their strategies by reducing exposure to local companies.  In short, the size of the trade credit market in terms of premium was shrinking and loss ratios were up which was dramatically affecting the profitability of credit insurers.

At the same time, this challenging period was an opportunity for the industry to adjust and educate the market properly about this product. Every correction tends to enhance market industry practices and often ends up with higher levels of professionalism. We will look at how this takes place in the next article: the Education phase.

Once upon a time: Trade Credit Insurance in Dubai – Episode 3: Growth

Once upon a time: Trade Credit Insurance in Dubai – Episode 5: Educat...
Receive our newsletter