Once upon a time: Trade Credit Insurance in Dubai - Episode 3: Growth - AU Group 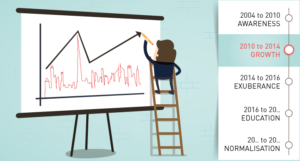 As explained in the previous article, the trade credit insurance industry was starting to pick up at the beginning of 2011, along with the general GCC economic recovery, thanks to revenues coming from oil (the Brent crude oil price had bounced back from $45 in 2009 to $112 at the beginning of 2011) and rising foreign direct investments.

Everything was in place at this stage for trade credit insurance to grow in Dubai and across the other GCC countries. Large corporates and SMEs particularly in the IT, electronics and construction industries understood how to use trade credit insurance to grow their businesses by raising additional working capital from banks. Indeed, the local banking industry was starting to leverage trade credit insurance as collateral to cover their credit risk, a process which would create at a later stage some misunderstandings between credit insurers and bankers for reasons of compliance (we will come back to that issue in another article).  Dubai is a trading hub and the most important tool for traders to grow their business is access to short term finance from banks or other funders; commodities traders are generally weakly capitalised, therefore leveraging their receivables or payables enables them to raise cash.  As a result, trade credit insurance, which was originally a preventative tool that helped companies to select the right customers, was becoming mainly a financing tool to get cash.

Gradually, credit insurers were penetrating deeper into each industry by insuring more and more local companies, and not just large corporates, but SMEs as well. This momentum allowed credit insurers to improve their knowledge of each local industry and the quality of their databases was enhanced.

During this period from 2011 to 2014, the trade credit insurance industry experienced double-digit growth every year in the GCC and, more broadly, in all the emerging markets. Emerging markets were in fact driving the growth of the main European credit insurers (with the exception of South America where Brazil was already suffering) while sluggish economic recovery in developed markets and fierce competition was affecting the traditional credit insurance market.

The sun was shining, maybe too much

In short, the sun was shining for credit insurers in Dubai; loss ratios were under control and double digit premium growth was ongoing. But, as often happens, the rot had already set in. Indeed, excessive risk exposure in specific industries along with poor risk assessment and some fraud were driving us straight to the next phase of development in the market: Exuberance.

Once upon a time: Trade Credit Insurance in Dubai – Episode 4: Exuber...
Receive our newsletter