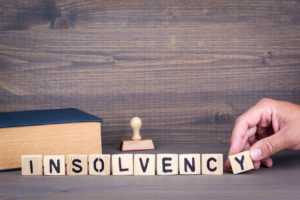 21,879 firms went insolvent in 2016. The largest insolvency administration firm had an annual turnover of €530 million. The number of insolvencies involving companies with annual sales in excess of €50 million grew by 53%.

All in all, a frightening trend is apparent – even though the overall number of insolvencies is on the decline, the number of large enterprises affected is steadily growing. When such companies become insolvent, this frequently triggers a domino effect among suppliers and customers alike. The danger of a knock-on insolvency is an intrinsic risk.

Insolvency administrator – a trustee working on behalf of the company or the creditors?

The insolvency administrator needs to ensure that the creditors of the insolvent company are satisfied. At the same time, he also has to attempt to guide the business back onto the path of success. This is not always an easy journey and there is very little leeway, because the affected company will frequently have structural problems that have existed for a long time already. Intelligent capital procurement models can sometimes be used to buy grace periods. One example of this is the sale-and-lease back arrangement. However, individual measures will usually be insufficient to achieve a turnaround. A multitude of measures is therefore necessary in order to save a business.

In this context, the insolvency administrator will use  every possibility available to him in order to procure fresh capital. One of these possibilities is to contest the legality of the payments made before the state of insolvency occurred  – known in short as voidable preferences.

Contesting the payments made prior to the opening of insolvency proceedings

Voidable preferences are a significant means by which the administrator can obtain additional money.

There are various scenarios in which the reclamation of obligations already paid can be justified. This approach is based on a simple principle:

“If a business should have known of the imminent insolvency, then any payment received by the business may be demanded back.”

This is based on the principle of equal treatment for all creditors.

But how can you find out that a buyer is actually unable to service its debts and is not making payments to other creditors?

It is generally not possible to answer this question unequivocally. For that reason the law has developed a practice by which businesses have to evaluate the indications available to them. Indications can include the fact that an instalment payment agreement was made, or that a deferral has been agreed. Such agreements are frequently entered into and there are also good reasons to conclude them in order to realise payments.

If the insolvency administrator becomes aware of this kind of agreement, then he will contest the payment by referring to such an indication. Evidence must be presented to the court showing there was no knowledge of any imminent insolvency and disadvantaging of creditors – in the past the burden of proof regarding lack of knowledge lay with the supplier. Meanwhile the limitation period for recourse amounted to 10 years, even if it was standard practice to raise a challenge within the last 4 years.

The latest reform of the insolvency law in 2017 was a response to certain alarming developments witnessed in practice. As will be apparent from the remarks set out above, there are a host of opportunities for raising challenges, and insolvency administrators continue to enjoy wide-ranging possibilities for the reclamation of payments. In particular, the fact that recoverability can extend over several years presents businesses with a tension-filled situation; a payment by instalments agreed today can prove very costly in 3 years’ time, even if you never had any more business dealings with this buyer. While the recourse time limit was indeed reduced from 10 to 4 years, this was merely to legally implement what had already been the prevailing practice. Other aspects contained in the reform likewise fail to deliver any sustainable relief in this respect, meaning that a transfer of risk is strongly advisable.